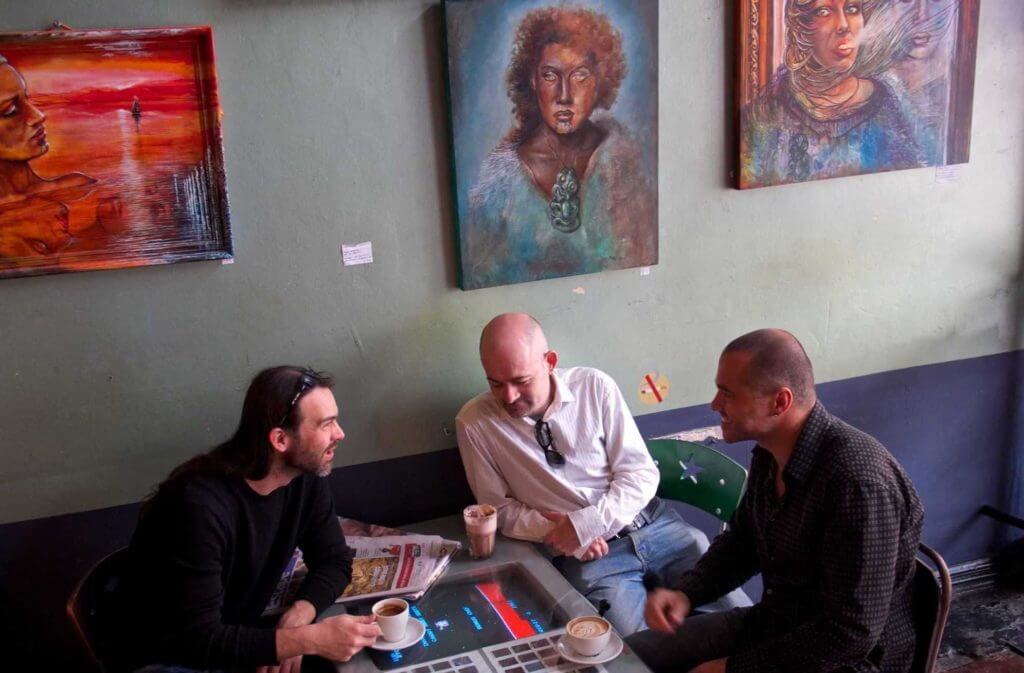 We chatted to Paul Spence and Lenz Gschwendtner about their business and the sale transaction.

Lenz says, “A few of us had worked for domain industries. When we first got together we went hiking and said, “We should do something together. Anything but domains.”

“But it ended up being the stuff we knew, and there was a lot of work that could be done to improve the quality of the domain buying experience.”

“The industry back then was exploiting customers in a way that made us want to build something more customer-centric. There were a lot of dirty tactics, like putting ads on dormant sites that were paid for and selling user data.”

“We were international from day one,” said Lenz. “We weren’t just focused on the kiwi market. In fact we were squarely focused on the US. The volume is tremendous.”

“We came to a point where it was logical that for the company to get to the next stage, we needed to change course. We looked at our options. Iwantmyname is a fairly small registrar and there was a lot of consolidation happening in the market, so it seemed like the time was right for us,” Lenz said.

“We went to ICANN, an industry event held a few times a year, and we went straight to the companies we wanted to talk to. We really had doors open left right and centre for us. People had noticed that we were building something that the customers wanted.”

It was Kindrik Partners’s involvement in the ecosystem that led to the initial engagement by Ideegeo for a shareholders’ agreement.

“Kindrik Partners had a reputation in the tech and startup community,” says Paul. “They’re commonly regarded as NZ’s pre-eminent legal firm for startups. There are some lawyers that claim to be good with startups, but there are few that actually work in that space every day. Kindrik Partners are just the go-to people for these sorts of things.”

It was a small acquisition for CentralNic, but they didn’t know who they were up against, says Paul. “Kindrik Partners added so much value for us in an international transaction like this.”

“If it’s the first time you’ve gone through an acquisition process, it can be a bit scary,” Lenz adds. “Throwing all these documents at you and asking you questions and saying, can you please prove that you did X, Y, Z – we really valued having the guidance.”

Kindrik Partners’s Fiona Mackinnon led the negotiation for Ideegeo with support from partner Julie Fowler. “There’s no way we could have waded through the documentation and grappled with the contractual wording and the due diligence without her guiding hand at our back,” says Paul.

“She was like a guide but also firmly in control of the process. I always felt like we were on the right track – that she was with us, ensuring that our interests were taken care of.”

“We were mindful that Ideegeo were the smaller party in the transaction. You want to be well resourced. The acquiring company sometimes felt like they’re blasting us with their London city lawyers and their two accounting firms, but Kindrik Partners went into bat for us and more than held their own.”

Kindrik Partners’s international experience was particularly useful in the transaction.

“There was a critical point in the negotiation where we had reached an impasse,” recalls Lenz.

“The other side were saying, ‘this approach is customary, this is how it’s always done’. And Julie said, ‘well I practised in the UK for thirteen years, and in my experience that’s not the case’.  There was dead silence on their end! It was nice knowing that we had the calibre on our side– that we weren’t going to get pushed around.”

advice for other founders

Both have some sound advice for founders and entrepreneurs considering how to build a company and gracefully exit.

On building a company, Lenz advises to take a global view to what you’re doing.  “A lot of kiwi companies will think if you start in Wellington, the next step is to go to Auckland, and then to tackle Christchurch. But you need to start think, let’s look at the English speaking market. And then the Spanish speaking market. You need to think globally.”

Paul has advice for those looking to find a buyer. “If you’re thinking about selling, look around what is happening in your industry and who the biggest players are – and then once you’ve got a shortlist, think about the best cultural fit,” Paul adds.

“We were a highly principled bunch and we turned down a few offers as a result of that. Price wasn’t the only priority for us. We wanted a company we knew we could work with in the future.”

(Want to learn more? Read our 2-part series on how to sell your tech company.)

Both are taking a well-earned break before diving into something new. “I’m making a point of having a bit of a break after Ideegeo before the next project,” says Paul. “Doing some travelling, collecting wine bottles, spending more time with my son.”

“I’m taking a forced sabbatical.” says Lenz. “Running a company is something that is with you 24 hours a day. There are so many things I could do – maybe this time around I’ll actually stay out of the domain industry.”